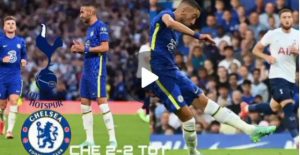 Timo Werner, then, doubled his side’s lead, but his effort was cancelled due to offside, as half-time ended favourite Thomas Tuchel’s men.

In the 48th minutes of the game, Hakim Ziyech doubled his side’s lead after Timo Werner, runs down the channels and finds Pulisic, who pegs it back for Ziyech in the middle, and his shot bobbles into the far corner after a slight deflection.

Tottenham Hotspur, then, scored their first goal through Luca Moura, who is effort deflects off Antonio Rudiger and past Edouard Mendy.

Bergwijn, the scored amazing goal to put the Spurs back on the game as match ended 2-2 draw at Stamford Bridge on Wednesday evening.

Chelsea, meanwhile, presented Champions League trophy before the kick-off match as club captain Cesar Azipilicueta brings the unveils the title alongside his team-mates at Stamford Bridge on Wednesday evening.