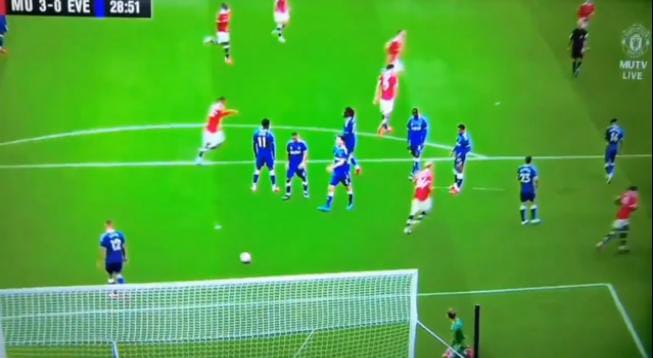 Portuguese International Bruno Fernandes was in his best form today as he bangs a Wonderful free-kick goal against Everton to extend their first half lead to 3-0 after Greenwood 8th minutes early opener and Captain Harry Maguire header.

Bruno Fernandes, making his first appearance in front of 50,000 thousand fans since returning from international duty, made it 3-0 just before the 30-minute mark.

A mistake by Jordan Pickford allowed Mason Greenwood to take advantage of United in the first half, before Harry Maguire headed in the second.

There were 3-0 to the break when Bruno Fernandes took the free kick over the barrier and passed Pickford.

Some substitutions in the second half took the breath away from the game, but Diogo Dalot had the last word when the header hit Asmir Begovic, practically putting the finishing touch.

A good afternoon for the Red Devils before next weekend’s season opener against Leeds, but Everton is worried about their showing, especially in the first 45 minutes.

The appointment of former Liverpool coach Rafa Benitez was not well received by some sections of the Everton fans and the Spaniard will have to start well to win them over.

The Toffees welcome Southampton on Saturday.